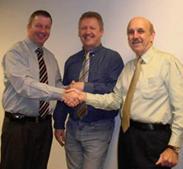 Roland Villiger, Kenny Stephenson and John Siefken (Left to Right) at the formation of 5S on Dec 1, 2005

5S Components Inc is a result of a management buyout of ABB Semiconductors Inc. by John Siefken and Kenny Stephenson. Effective December 1, 2005, 5S Components became the successor to ABB Semiconductors Inc. Kurt Hoerhager, Managing Director of ABB Switzerland Semiconductors and Roland Villiger, Director of Sales, commented that “Creating 5S guarantees focus on semiconductor sales in North America, a vital part our growth strategy. John, Kenny and the 5S team have my full backing and ABB will be able to support the North American Market and its customers even better than in the past".

Since the mid 1980’s ABB has marketed it semiconductor products in North America. After ABB was formed on Jan 1, 1988, ABB increased it focus on North American markets by having a dedicated sales group, which was a part of ABB Technology Inc. and was headquartered in New Jersey. When John Siefken joined ABB in 1992, this sales operation was moved to Pittsburgh and a new growth strategy was implemented.

When it became clear 2007, that the present facilities were inadequate, the company decided to move to a new location where adequate space was available for growth and expansion. In February 2008, 5S moved to it new location at 630 Fifth Avenue, in East McKeesport, PA, a suburb of Pittsburgh, Pennsylvania 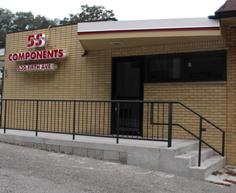